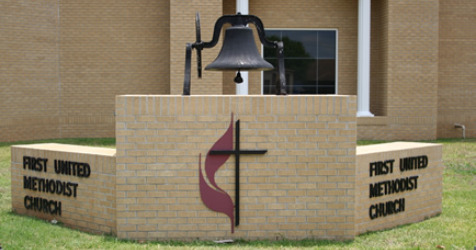 The change from a more or less informal worship service to a slightly formal yet warm and reverent one was appreciated by loyal, long-time members and new members alike.  Also, with oversight from Reverend Harper and excellent lay leadership, Sunday school classes were added, the United Methodist Youth Fellowship began to grow, the administrative board became much more active and the United Methodist Women continued to spearhead some of the many outreach programs of the church.
In 1982, the Bullard First United Methodist Church was awarded the Copeland Evangelism Award by the Texas Annual Conference.  This honor is awarded for outstanding leadership in evangelism and is certainly a testament to the dedication of both the staff and congregation.  Reverend Harper served as pastor until 1988.  His tenure as pastor witnessed sustained growth and by the time of his retirement, congregational membership was at almost 300, church facilities had been expanded to include a new fellowship hall and classrooms, and The Bullard First United Methodist Church was a leader in evangelism and community outreach in southern Smith County.
In 1988, Morris Matthis was appointed pastor at Bullard and continued the trend of evangelism, growth and outreach begun by Reverend Harper.  In 1990, Reverend Matthis received the Eric Anderson Award from the Texas Annual Conference.  This award is given to a young pastor demonstrating outstanding leadership and dedication in the area of evangelism.  From 1991 until the present, Bullard First United Methodist Church has seen many changes.  During this time, the town of Bullard has experienced tremendous growth and almost tripled in size.  The surrounding area has also seen dramatic growth resulting in an expanding congregation and the construction of a new sanctuary and Family Life Center.  A number of able pastors have served during this time including the Reverends Martin S. Vershel, Fredda Minick , Michael Mayhugh, Paul E. Quiggins, Gary Fitzgerald and Randy Fitzgerald.

Today, The Bullard First United Methodist Church is a fulfilling and dynamic place to worship.  Our wonderful pastor, David Brasher, joined us in June of 2011 and under his leadership we expect God to continue to bless us and work through us to Shine the Light of Christ in our Community.